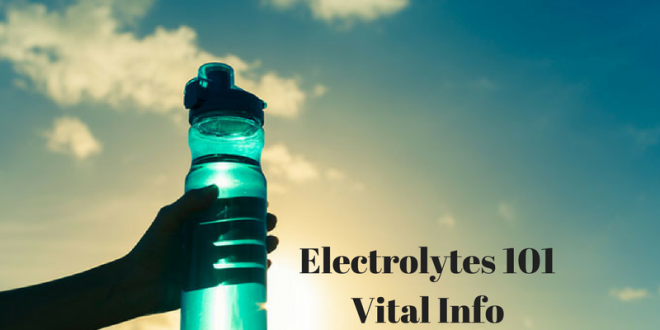 (candid notes from the podcast.  Listen!!)

Coach BK and Endurance Athlete / Nutritionist Rachel Shuck, chat about Electrolytes in a 101 kind of fashion.  What the runners and triathletes need to know to perform well, be healthy and be safe.

MAIN – What are electrolytes

Electrolytes are minerals that, when dissolved in water, break into small, electrically charged particles called ions. Present wherever there’s water in your body (think blood, cells and cell surroundings), electrolytes regulate your body’s fluids, helping to maintain a healthy blood pH balance, and creating the electrical impulses essential to all aspects of physical activity — from basic cell function to complex neuromuscular interactions needed for athletic performance.

The water then serves as a conductor, allowing ions to move across membranes and carry fluid, nutrients and waste. In the process they trigger nerve impulses and muscle function and allow ions in the blood to neutralize lactic acid as well as other acids dumped into the bloodstream as waste.

-To be a bit geekie, electrolytes are ions (particles with a charge on them) that control movement of molecules.

–The ions (+ -) accumulate in the watery blood system of our body. All of our cells use that (+ -) charge differential as a driving force when they isolate (permit) some ions on the inside of the cell and others on the outside.

In laymen terms:  Electrolytes ring doorbells and open doors.  Stuff goes in and out.

NOTE:  Don’t think linearly when looking or listening to the percentages mentioned of the elements and think that they are prioritized as Na more important and Mg less.

YO!!!! Also, did you know:  during the metabolic process, you make your own water!  When muscles burn glycogen (fuel for the mitochondria), they release about 2.4 units of water for every 1 unit of muscle glycogen. :)) COOL UH?!?!  This helps the body protect itself against dehydration.

As a rule of thumb we need to be drinking Body Weight x .31.  In long distance biking we say about a bike bottle an hour.  Tho these numbers are very individualized.  This you just need to figure out and train with consistently.  It really depends on your sweat ratio.  Which a good coach can do.

NOTE:  Electrolytes ARE NOT Vit C or Vit B or or or   … soooo.  Products (and some fancy products) that use the work “hydrate” but have no Na, Ca, Mg or K (chloride comes with them) in them is misleading for electrolyte replenishment, aka helping you to hydrate or USE h2o.  Vit C does not help you absorb.

Interesting Factiod.  If you don’t have enough sodium, your body produces a hormone, ADH that helps to prevent you sodium to dip too low.  This hormone promotes inflammation in your arteries.

HEED THIS ADVICE.  Do not take NSAIDS when it’s hot and your training/racing.  The prostiglandins produces are large molecules and are damaging to the kidneys.

NOTE:  You can’t “stock up” with electrolytes.  It doesn’t work like that.  The kidneys are highly involved.  Let’s assume they are working up to par.  You can fill up the tank, but not stock up.  The body will balance everything out and get rid of what it doesn’t need at that point.

The membrane of every cell is composed of fat and acts as an insulator. By encouraging more of the sodium ions to accumulate in the blood stream, outside the cell (with potassium on the inside), they build up a charge on either side of the cell wall. That charge separation then becomes the driving force for all cells to be able to move the life giving materials in and out of the cell. It’s important to understand this because all the electrolytes are vital for cellular function and especially necessary for high performance. Simply put, without them we could not exist… even with the absence of just one of the basic 4 electrolyte minerals, we would be history.

The list of functions that electrolytes control is endless but include; temperature control / fluid level / cardiac arrhythmia / respiratory rate / digestion / fluid transport across cells / ion transport / renal function (bladder control) / neurological function / signal transduction / thought / memory/ all the senses both gathering information and then transporting that message to the brain and to the muscles including the sense of touch / energy production / glucose metabolism etc. etc. It is easier to count the stars in the sky than to list all the functions in the body controlled by electrolytes. But the body, in its miraculous evolutionary way is structured to maintain it all in some combinatorial marvelous life-giving manner. The majesty of it all is so wondrous that the study of cells and of life can often leave one breathless. We frequently sit back in our research as the concepts unfold and are literally awestruck. The most one can attempt is to try and convey a small picture of this wonder.

Cramping is one of the most common complaints of athletes. It can occur at any time but more often at the tail end of their workout. Cramps are a one way street in the complete cycle of muscle action. All body motion is controlled by the opening and closing of ion channels that sit in the membranes of all cells. Sodium (Na) contracts the cell and potassium (K) relaxes it. Similar action occurs to transmit a thought with Na and K triggering neurons (depolarizing) to both transmit and fire. In effect the electrolytes do it all. You can’t blink your eye or even see or hear without them.

A heart cell begins the process with Calcium (Ca) signaling the Na ion channel to open to begin the contraction cycle. There are hundreds of Na and K ion channels on each cell. A half second later Magnesium (Mg) encourages K to rush in which relaxes the cell. That’s the beat of your heart or the closing of your fist. With a heart cell the cycle is non stop; constrict with Na and relax with K. Its quite easy to see what happens when a muscle cramps. In essence you have half a beat. If a cramp hits your heart, you’re history, but in a different muscle you’ll hurt, but recover. If you’re swimming in a race half way home, it could be a disaster. Whenever it happens, it’s the guys in charge of the relaxing half of the cycle, Mg and K, that are missing.

Actually, what is happening, is that the high K concentration is sufficient to complete the back side of the heart beat, or leg pump, etc. Without those 2 electrolytes Mg and K, in plentiful supply, your muscles have only the first half of the action potential to work on. Over time, that’s a one way street, that can end up as a cramp. Cramps don’t usually occur when your doing sprints, they are the result of cellular stress (loss of electrolytes) over long workouts.

A number of coaches have tried “pickle juice” to prevent cramping in hot weather. Pickle juice is predominantly vinegar. Vinegar is acetic acid, and is used to remove sodium (Na) with individuals with high blood sodium levels. The coaches are lowering their athletes Na levels to prevent the first half of the muscle cycle instead of making sure that they have enough of all the electrolytes needed. Lower Na and you may not begin the cramp. Not exactly what the doctor ordered, but it can work.

However, you are removing Na to restore balance, instead of providing the correct electrolytes that the body needs at that moment, which is ……..Mg and K. Training logic says that you want as high a level of electrolytes as possible, all the time, not robbing one, Na, to achieve balance.

In essence, the closing and relaxing of a muscle is dependent on the four mineral horseman of function, calcium (Ca), sodium (Na), magnesium (Mg), and potassium (K).  Sodium constricts and potassium relaxes, with Ca and Mg initiating each phase of the action.  If an individual is low in potassium, it appears that that singular event of low potassium can be sufficient to permit a cramp to occur. Without enough potassium available to complete the relaxing cycle, a random signal (or even a conscious one) to close by an out of balanced condition can leave almost any muscle in a locked position.

To understand sodium’s influence on the closing of a muscle and potassium’s role in engineering the reverse (the opening), it could be helpful, though somewhat macabre, to examine the procedure for executions.  Generally, the act of hanging was replaced by electrocution, which was in turn abandoned by the painless, yet highly efficient act, of an injection of a high concentrated solution of potassium.  Flooding the body with potassium forces all muscles to relax.  Eventually the concentration of potassium becomes so high that it dwarfs the normal balance with sodium, thereby restricting any ability to affect a normal muscle function.  The net result is to block the beating of the heart.  In effect the prisoner relaxes to death.

Essentially an execution by injection is the reverse of a cramp.  The execution is clearly an excess of potassium and the cramp appears to be the reverse.  The injection of potassium overwhelms the normal balance of sodium and robs it of its ability to initiate muscle function; the body cannot begin any function, you couldn’t even blink your eye.  The reverse of high sodium (or to be more precise, the absence of sufficient potassium) is an imbalance that sets up a condition for a cramp to occur.  The poor individual with insufficient potassium on hand may not be able to relax that muscle and must message or stretch the knotted jumble of muscle to force some potassium into the cells to turn off the tight cramping condition.

The potential cure for a cramp would logically be to have available sufficient stores of potassium.  However, magnesium also plays an important role in muscle function, so it is necessary to insure an adequate supply of magnesium.  Calcium is also important, but there is a ready supply from our storehouse of bone which appears to be sufficient for muscle function.   However, the supply of sufficient Ca and Mg as we age, is often insufficient, even though normal blood test results suggest there is enough.  But, that is a subject beyond this current discussion of cramps.